This is the first of my 2 recipes from the Ndali Vanilla gift swap that I attended at Fortnum and Mason on 24 September 2012. It’s also the one I won a ‘runner’s up’ award for the ‘best cake or cupcake’. It was unexpected (there were some fabulous looking baked goodies!) and I was very proud! I got a bit carried away when I was baking and took lots of photos, but it’s nice to see what you’re doing, isn’t it?!

I saw somewhere ages ago, someone offering chocolate, hazelnut and vanilla cupcakes. They sounded interesting and something I wanted to try. Last Christmas, I made something similar – chocolate and hazelnut cupcakes and they went down very well. So, I revisited my recipe (once I found it from my ‘wonderful’ filing system!), tweaked it and the following cupcakes materialised!

I gave up wheat at the start of summer and I feel so much better for it. Occasionally I’ll eat it, as I have no reason not to eat it other than I don’t want to, but I am trying to bake and eat without wheat as far as I can. That’s another reason why I love these cupcakes. Most of the nuts I use in my baking are almonds, so it’s great to find another one to use! One day I’ll get round to making this as a big cake, but in the meantime, here’s the recipe I have adapted from ‘it pleases us‘

I added vanilla to the cupcakes and I have made a whipped ganache icing, which I think really works well. I also dipped my hazelnuts in chocolate before using them to top my cupcakes, just to make them that little bit prettier!

Finally, just before I get to the recipe, I wanted to add (as I haven’t stated it anywhere else!) that the chocolate, the hazelnuts, the sugar and the vanilla that I used were all fairtrade products. Using fairtrade products is something which is incredibly important to  me and when I post my write up of the gift swap, I’ll explain why. For now, happy baking!

9 whole (or half) hazelnuts

Firstly, make the cupcakes. Put cases into your cupcake tray and preheat your oven to 150C. (NB, I have a very hot fan oven, so this is the temperature I used. If your oven isn’t a hot fan, I’d suggest using 170C.)

Put the chocolate and butter into a bowl and place over a pan of barely simmering water. Stir until both have melted together. Allow to cool slightly.

Whisk the eggs and sugar in a bowl until thick and creamy. This will take several minutes. Add the chocolate mixture and whisk to combine.

With a whisk, beat the egg whites in a spotlessly clean bowl until they are of stiff peak consistency. Add 1/3 of the egg whites to the chocolate mixture and stir carefully. Then add the remaining egg whites and fold carefully until just combined. You don’t want to lose all the air you’ve just created!

Spoon the mixture into your cases and bake for about 20 minutes. The best way to describe if your cupcakes are ready, is if you insert a skewer or sharp knife into one, it will come out still a little bit moist.

Leave the cupcakes on a wire rack to cool completely before icing.

Whilst the cakes are baking, start on the icing. Put your finely chopped chocolate into a large bowl. (You are chopping it finely so that it will melt easier – you don’t want lumps of chocolate in your ganache!)

Pour the cream into a pan and add the sugar. Heat gently until the sugar has dissolved and then increase the heat and bring to the boil. Remove from the heat and stir in the vanilla. (When I did this, I used 1/2tsp vanilla and although I could taste it in the cream, I couldn’t taste it in the finished ganache, so I would recommended that you use more vanilla.)

Pour the cream mixture onto the chocolate and beat quickly until the chocolate has completely melted. Leave to cool completely. (This is the cooled ganache, just before I whisked it; it’s my ‘before’ shot!)

At this time, melt your remaining chocolate in a small bowl over a pan of water on a very low heat. Then, dip your hazelnuts into the chocolate and allow to cool.

When the ganache has cooled completely, get your whisk out and on a high setting, whisk the ganache until it has a very pale colour and is of a light and smooth consistency. This will take several minutes. (This is the ‘after’ shot – what a difference a whisk makes!)

At this point, put the icing into a piping bag and pipe onto the cupcakes. (If you make your icing before you’re ready to pipe, whisk for a few seconds before you put into your piping bag, as it tends to go hard otherwise.) Place a hazelnut onto the top of each cupcake and enjoy!

* Edit. After pressing ‘publish’ I realised that not everyone will be as confident with piping as I am. To get the swirl on my cupcakes, I used a Wilton 1M nozzle. It’s a great nozzle as if you pipe from the outside of the cupcake to the centre in an anti-clockwork motion, you get a swirl and if you start from the centre of the cupcake and pipe in a clockwise motion, you will pipe a flower. The piping bag I used is a reusable bag, though you can buy disposable ones from cake decorating shops, the internet etc.

You need to pipe when the icing has just been whipped, though be careful as the heat of your hands will melt the ganache towards the end (you may notice that cupcakes 7, 8 and 9 did not make the final photograph!).

If you don’t have piping bags and fancy nozzles, then a palette knife, or simply a small knife will be fine.

Finally, if you don’t use all of your icing, pop it back into your fridge and after an hour or two, you have vanilla truffles. Yum! 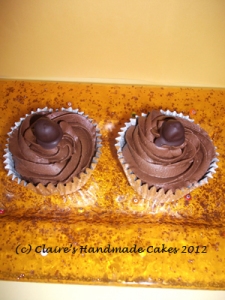