I’ve re-written this blog several times this week. Not sure I should be admitting this, after all, you’re probably reading it and asking ‘really?’, but yes, this week has seen several re-writes. Although I’ve been really busy lately, I haven’t put many cakey posts on here and after all, I am all about cake (though cake comes in many guises and with many fillings, so all posts written to date are valid and I’m not rubbishing everything I’ve written!). I thought I might change that as I have two cakes this week.

I had a request on Friday for a cake: I talked through the brief, what was required, to feed how many, ideas for design… Then the all important question ‘when would you like it?’. Tuesday morning came the reply. With a ‘you’ve got 4 days to do it’!!!

Sometimes it’s possible to provide a fabulous cake in 4 days, sometimes it isn’t. Cakes don’t just appear after waving a magic wand! Ingredients need to be bought (whilst I usually have most ingredients, I don’t always have everything as I always make my cakes fresh), along with cake boards and boxes and ribbons to make them look pretty. Again, I usually have all of those, but sometimes a quick trip to the cake decorating shop is required.

Then, there’s the time it takes to weigh and measure everything out, mix it all together, grease and line the tin, bake, wash up, allow the cake to cool, make the buttercream…. and that’s all before you’ve started thinking about the design, or creating it!

For the design above, I covered the board the day before I placed the cake on top to give it time to dry. I made all of the stars the day before I needed them too for the same reason. These were covered in edible glitter (green, black and silver), though as they were also on wires, they would not be fit for consumption. The design came about as the lady whose birthday was being celebrated was a WI member and the WI’s logo was adapted to reflect this. This was painted onto a small plaque of white sugarpaste, in two different shades of green.

I kept the green theme throughout the cake, with the letters coloured in ‘Disco Green Kelly’ and the ribbons were also green. I placed a single burgundy rose bud on the board to add a little interest and to break the green-ness of the cake up and a cake was born!

There is no such thing to the cake decorator as ‘just a sponge’ – cakes are an important part of a celebration and if one has been ordered, it has to look the part. Thankfully on this occasion, it did!
Speak to you all soon and happy baking!

I don’t just make cakes and other treats. I also make the fillings to go in them, anything from buttercream and ganache to jams and curds.

As this is summertime and the fruit is ripe, I’ve started making jam. I have two cherry trees where I live (one is a sweet cherry tree, the other, a rather tart one), so on Tuesday, I went cherry picking. A neighbour had been given some dark red cherries from a friend’s tree and he very kindly added them to my bounty, so off I went into my kitchen, with a pound and a half of cherries. (I know I ought to be using metric now and sometimes I do, but I still work in pounds and ounces!)

I have yet to invest in a cherry stoner, so armed with my trusty kitchen knife, I de-stoned all my cherries. It took me an hour. It was quite therapeutic to begin with, but I must admit, I did get bored towards the end. I hoped it would be worth it…

This year I’ve decided to be more experimental with jams. To date I’ve made lemon curd, marmalade (which I didn’t leave long enough before I bottled it so the rind was only in the top half of my jars!), strawberry jam and harlequin jam, which is a mixture of strawberries, redcurrants, raspberries and gooseberries. I’ve acquired a few books, trawled the internet, and sought inspiration in fairs to come up with some unusual, or less mainstream perserves.

The only problem with this, is that there are hundreds of recipes for the same thing! For my cherry jam, I could add pectin (I didn’t), lemon juice (I did) and sugar ranged from half the amount of fruit to 100%. I put about half a pound of sugar in and when I tasted it, it wasn’t too sweet, it was probably just sweet enough.

Disappointingly, my cherries only yielded just over 2 jars of jam. They’ve been labelled (so I know what was made and when) and are now sitting on a shelf in my kitchen, waiting to be joined by other jars. I’m going fruit picking this weekend and will not only make jam, but chutneys as well, to sell at Christmas fairs (yes, I’m sorry, I am already thinking about Christmas!). I made some rather tasty gooseberry chutney last year, so will be repeating that this year. I have ideas of what other jams and chutneys I want to make, but I’ll have to wait and see what fruit I end up with, before I get too carried away with my plans!

I already know that when the plums in my garden are ripe, I’ll be making plum chutney and hopefully a plum and vanilla jam. I have an apple tree as well, so I’m thinking possibly mint jelly with that, but I’ve a few months to decide!

It is a shame to be in my kitchen when the sun is out, but I know that come the autumn, when the weather is miserable, I can curl up with a hunk of bread (that I will have learned how to make by then) and smother it with some home made jam. What could be better? 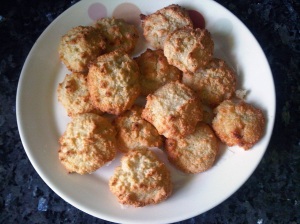 I’ve just returned from 10 days in Spain. I had quite a lazy time – lounging by the pool and drinking lots of sangria! It wasn’t all play though as I took my laptop with me and had some very productive days.

Whenever I go to France, I love to while away the hours visiting patisserie after patisserie. I don’t actually buy something from every one I go past, but I do stop and look in every window. I love patisseries and become inspired by them very easily.

Spain isn’t quite the same as France, or at least the south (where I was staying) isn’t. There was the odd bread shop dotted around, and they were always closed when I went past, but that was it.

Whenever I saw a cake shop, I was quickly disappointed. Cakes tended to be of the pastry variety and full of cream. When you consider the heat in the south of Spain, this seemed a little odd.

To compensate for the lack of cake shops, I took matters into my own hands and whipped up an apricot tart. The pastry was easy to make (flour and butter. Due to the heat, I didn’t need any water!) and was of the flaky variety! The creme anglaise was a little by eye (my measuring scales offering a mere guidance as to the weights one required) and the apricots – well, they merely required halving and removing the stones.

The finished tart was proof that you don’t need a full stock cupboard or exciting cake shop. With the left over egg whites, I threw together some macarons which more than compensated a cake-free week!